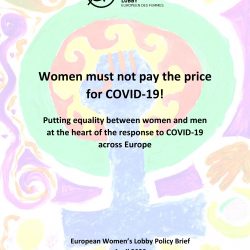 The European Women’s Lobby (EWL) is an NGO founded in 1990 and the largest umbrella organisation of women’s associations in the European Union (EU), working to promote women’s rights and equality between women and men. As of November 2009, EWL membership extends to organisations in all 27 EU member states and the three candidate countries, as well as to 21 European-wide bodies, representing a total of more than 2500 organisations. END_OF_DOCUMENT_TOKEN_TO_BE_REPLACED